Obesity is a condition characterized by the abnormal accumulation of fat in the body. It's usually classified using the Body Mass Index (BMI) however fat distribution should be considered too. Obesity is a major health issue globally with WHO attributing at least 2.8 million deaths yearly to overweight and obesity. 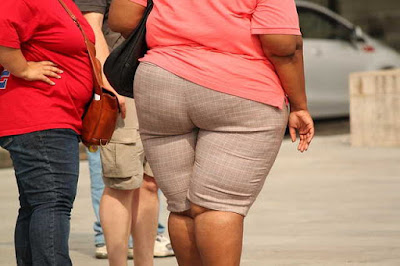 The prevalence of the obesity has been on a steady rise globally, both in developed and developing countries. Those most affected tend to be those that reside in urban areas. Obesity can affect people at all ages including children, but women tend to be more likely to be obese than men. In 2008, WHO reports that of the estimated number of people over the age of 20 that were obese, 205 million were men and 297 million were women.

Various methods are used in diagnosing obesity. Some of the common ones include:
1. BMI (Body Mass Index)
2. Waist Circumference
3. Waist Hip Ratio

To calculate your BMI, please visit this page.

Waist circumference is used to determine the fat deposition around the abdomen. For this reason it's a good indicator of central obesity (upper-body fat) and the risk factors associated with it. Waist circumferences of more than 88cm (35 inches) in women and 102cm (40 inches) in men indicate too much belly fat and are associated with high risk of obesity-related health problems.

This is determined by taking the ratio of the waist circumference to that of the hips. A waist to hip ratio above 0.90 for males and above 0.85 for females is categorized as central obesity and is associated with higher risk of other health related problems.

When talking of weight, you may come across these two terms. Here's what they mean:

a. Apple Body Shape
This is type of body shape resembles that of an apple. The defining characteristic is upper-body fat – that is, more fat in the upper region of the body (face, neck, shoulder, arms, chest, upper part of abdomen) than the lower part. This type of shape is usually referred to as Central /Abdominal Obesity and is linked with higher risk of chronic diseases like diabetes and cardiovascular diseases.

b. Pear Body Shape
In this type, the lower part of the body (thighs, hips, legs, buttocks and the abdomen) is larger than the upper part hence taking the shape of a pear. It can be found in the both sexes though it's more common in females. Having a pear body shape is considered to not increase ones risk of chronic diseases like diabetes and cardiovascular diseases.

1. Energy imbalance
Energy imbalance is the main cause of obesity. What this means basically is that a person consumes high amounts of energy, and in particular fats and sugar, without burning it off. Consequently, the body accumulates excess energy and stores it in the form of fat.

2. Physical Inactivity
Little to no physical activity is closely associated to Obesity. Being active uses up the energy we get from food, so if one becomes too inactive, that energy ends up being stored as fat in the body.

3. Unhealthy diet
Obesity is also contributed by poor dietary choices. This includes:
Unhealthy eating habits run in families. Children that learn poor eating habits from their parents may continue them into adulthood or find it hard to change them.

4. Inheritance
Obesity, in very few cases, may be caused by genetic factors inherited from parents. One such condition is the Prader-Willi syndrome, a genetic disorder which causes excessive appetite leading to extreme obesity. Genes may also affect the amount of body fat one stores and how it's distributed and how energy from food is made and utilized by the body. Other traits such as unusually large appetites, may make losing weight problematic.

5. Health Conditions
Certain medical conditions such as an underactive thyroid gland and Cushing's syndrome may contribute to weight gain which leads to obesity.

6. Medication
Some medicine can cause weight gain by slowing the rate of metabolism.

7. Emotional factors
Some people may eat more when stressed, depressed or when angry. This type of eating is called comfort or emotional eating and is used to make one feel happier rather than to satisfy hunger.

8. Pregnancy
Women gain weight during pregnancy to support their babies' growth and development. After giving birth some women may find it difficult to shed this “baby weight” leading to overweight and obesity.

9. Socio-economic issues
Lacking knowledge or the means to access healthy food can lead to obesity. Lack of facilities or safe spaces for exercise may also contribute to obesity.

If not managed, obesity increases one's risk of certain health conditions. Some of these include:
It can also lead to various Psychosocial issues such as:

Next: Prevention and Management of Obesity